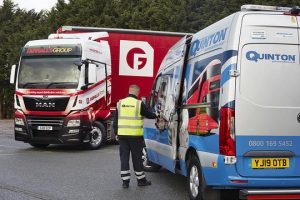 Logistics and warehousing firm Farrall’s Group has switched its fleet of 65 trucks and 100 trailers from a mixture of tyres to a Michelin-only policy, following a demonstration by local dealer Quinton Tyres.

The rubber – which will come from Michelin’s X Multi range – will be subject to a multi-life policy, whereby tyres are removed and regrooved once the tread depth reaches 3-4mm. Worn examples will subsequently be retreaded at the manufacturer’s remix plant in Stoke.

“Quinton Tyres put the Michelin solution forward when we went to market for a new tyre partner and we were really intrigued to see the difference a professionally managed Michelin policy could make,” said MD Matthew Farrall, “the level of detail and technology they used to complete a full audit inspection of the fleet was very impressive.

“We compared the product against data for rival brands, but it was the Michelin tyres which stood out in terms of fuel efficiency, pence per mile and longevity, particularly when we factored in regrooving and retreading.

“The move means we are now saving fuel and improving the sustainability of our operation. We take a lot of pride in our fleet and are focused on making sure the team has the best tools to do the job.”

Boughey has become the first UK haulier to place a significant order for Michelin's new X One MaxiTrailer tyres. They have so far been specified on 100 Montracon and 30 Schmitz trailers. The new 455/45 R 22.5 tyres, which use Michelin's Infinicoil architecture, have a 120mm-wider track and 35% more rubber in the compound than Michelin's XTE2 tyre. This, says Michelin, allows them to deliver 50% more mileage.

"We are happy to try new things, just so long as they look and feel right, and these do," says group fleet engineer Paul Brimelow. "We felt comfortable with the product and Quinton Tyres was happy to support it." He says although Schmitz was already familiar with the Maxi-Trailer tyre, Montracon had to make some alterations to the trailer in order to accommodate it.

Although it is too early to determine whether Michelin's durability claims are true, Brimelow is so far happy with the performance. "We have some positive comments from the drivers, and haven't had a failure yet. My only concern is how the wider footprint will cope with scrub." Boughey specifies Michelin's XDN2 Grip tyres on the drive axles.